A few months ago Dive N Boar took a little time to reevaluate and change their menu and boy are we glad they did!

Since the first time I visited Dive N Boar, shortly after their opening a few years ago, I knew the bar area was something special and the food was good, but the drinks blew me away. Well, during my most recent visits to Dive N Boar, I believe the food has stepped at to the cocktails and said “come at me bro”.

As far as the menu goes, I’m not sure how to describe it beside just saying delicious. It has a variety of options from “snacks” and small plates, which include items such as fried chickpea and beets to crispy frog legs and wild boar sausage, to larger plates like the double dank burger.

The cocktail menu is definitely a show stopper with drinks such as the Governor Grey- house blended grey tea infused vodka with fresh squeezed naval orange juice, and Hound- a vodka based cocktail with a black pepper simple syrup and fresh squeezed grapefruit juice.

First of all, I don’t usually blog about my time with a large group of people but Dive N Boar was very accommodating of us and this was such a great experience I just couldn’t help myself.

Now, on to the good stuff! To drink, I had a special cocktail the bartender was preparing. I saw a girl at the bar with a flower in her drink and had to know what she was having. If I remember correctly, it was vodka based with a house made floral simple syrup. Phenomenal drink! By the end of dinner, I think most of our table had ordered one. (If I may make a suggestion to Dive N Boar- psssst put it on the menu and feel free to name it after me- jk on the naming part but seriously) Another popular cocktail for our group was the San Soucci Sour- Four Roses, simple syrup, fresh squeezed lemon and lime juice, soda with a cabernet floater. 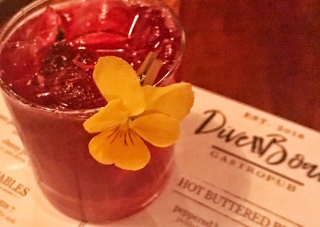 For dinner, I can actually say I tried a variety of items with the appetizers, due to the group passing everything around (one of the benefits of eating with a friendly group of people) and unfortunately I can’t remember many of the things I tried due to so many in a small amount of time, but I do recall the cheesy poofs. So, they must have been my favorite.

For my entry, I had the duck leg confit and boy was it delicious. It was cooked perfectly, I don’t think I used a knife to cut it at all. S had the octopus and said it was amazing. I was actually really glad they had it on the menu, as he has been trying to get octopus for the last month. 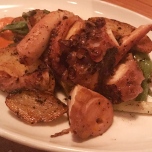 Some other things I would suggest you try, due to a previous experience at the bar, the lamb pastrami in the hot buttered buns section on the menu and the pork on a stick, which I believe has been changed to pork belly on a stick on the menu. Both are phenomenal items and great for those that desire smaller portions. 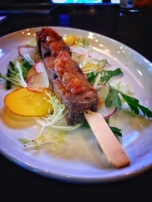 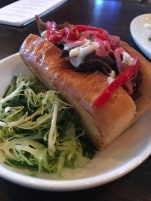