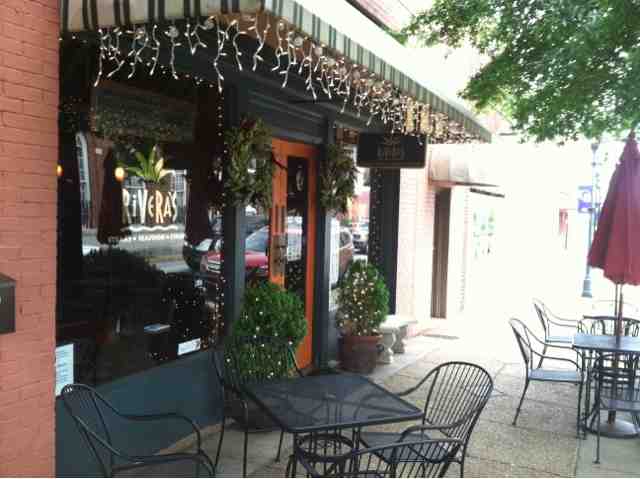 Yesterday, after the strawberry patch, Captain Seahorse and I made a trip to downtown Greer, SC for lunch. We didn’t really know of any restaurants in that area except The Cazbah-Greer, so I did a quick check of Urbanspoon. After playing with the food slot machine a few times, Cafe Rivera was suggested. I had seen the restaurants a few times but had never stopped in so I figured this was my chance.

Cafe Rivera is located in downtown Greer on Poinsett Street. The lunch crowd seemed very laid back. Captain Seahorse said it gave him a South Beach vibe, which is good since the owner was raised Miami and has put a Latin American-Cuban twist on most menu items. Cafe Rivera serves lunch Tuesday through Saturday 11:30-2:30 and dinner from 5:00-9:30.
Cafe Rivera’s menu ranges from plantains to chips and salsa as appetizers, salads, burgers, seafood and steaks. The dinner menu seems to have much more of a variety than the lunch menu, of course.
Once we arrived at the restaurant a lady took us to our seats even though it was close to closing for lunch-had to be about 215. She took our drink orders and gave us a few minutes to look over the menu. It all looked so good, but one thing jumped out at me a JUICY LUCI! Let me tell you, I had not heard of these until recently, when I was reading a fellow bloggers blog. He went on and on about how amazing these sandwiches were and how he had not found ONE since he had been living in South Carolina. So I decided, I had to try Ms Juicy Luci.
Ms Juicy Luci is a cheeseburger, if you will, but instead if the cheese being between the meat and the bun, it is all in the center of the patty. It is quite the concept! When the waitress brought my burger out she gave me extra napkins and told me it would cause a mess. She also told me not to cut the burger as all of the cheese would run out. As she was telling me this, I picked up the burger and took a bite. I heard a small “pop”, a little air and a “splat”! That’s right the cheese flew right out of the bottom. I was a little disappointed, but I guess it saved me the trouble of it oozing out later. 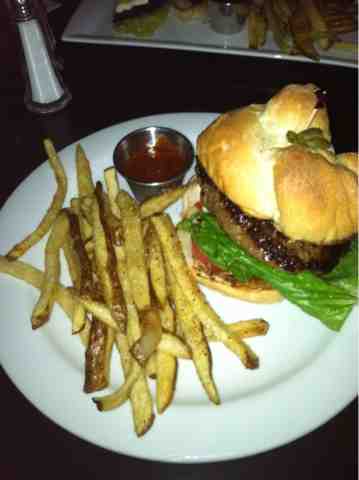 I have to say the burger was quite delish, but they did have a sign outside that read “voted #1 burger on Urbanspoon” so whatelse would I expect. As for the fries that came with the burger, I’m not sure. It seemed they had good flavor but when mixed with the housemade “ketchup”, the flavor was thrown off a little.
Captain Seahorse ordered the Portobello burger, which is a sandwich with roasted portobello mushrooms, avocado, plantains (and yes they are juicy), tomatoes. He said it was fantastic!! His sandwich also came with hand cut fries and housemade “ketchup”. 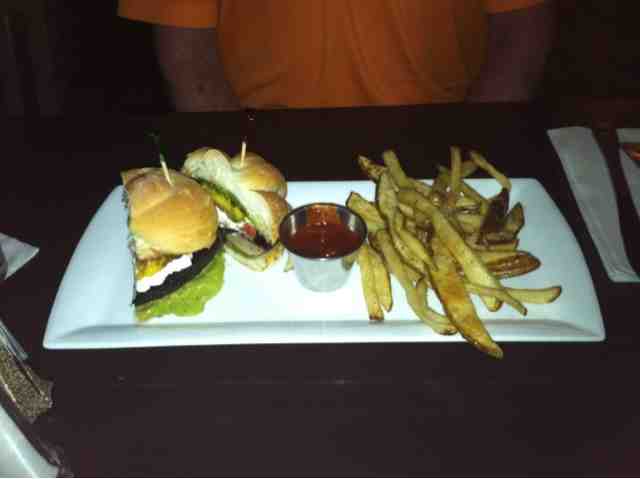 So if you are ever in the little town of Greer and happen to be looking for a cute little spot for lunch, remember Cafe Rivera. It also looks as if it could be a great dinner spot. They suggest making reservations for dinner-it’s kind of small.
Well it’s bedtime for me. I would say I hope I make it to the Greek Festival this weekend but everytime I try to do something I don’t make it. 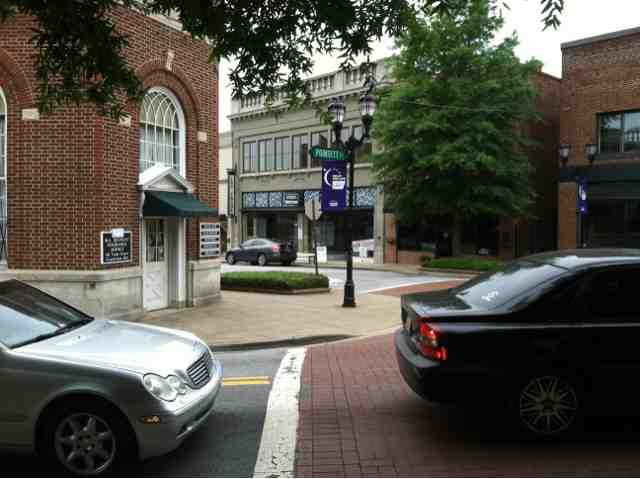