Captain Seahorse and I attended a wine dinner last night at the Cazbah in downtown Greenville. We have visited the Cazbah several times, but this was our first wine dinner and it just so happened to be a “mysterious” one at that. Neither of us knew what to expect, we read food and 12 wines for $40 and signed up.

Upon arriving and being seated at our table we received a glass of champagne and introduced ourselves to our dining pals we were sitting with at the table. Now, if you’ve ever been with Captain Seahorse and I in a social setting then you know it takes us a while to get acclimated to our surroundings.

The dinner started with everyone receiving 2 glasses of white wine. The bottles had been wrapped in aluminum foil so no one knew what we were drinking. The owner of the Cazbah said knowing what kind of wine you are drinking makes you think it should taste one way instead of another. The dish prepared with these glasses of wine was a lobster taco- small pieces of lobster with a creamy corn and cilantro salsa inside a flour tortilla. AH-MAZING is all I can say! After eating the taco and comparing the taste of the wine with and without the food, a discussion started about what we were drinking. Was it Chardonnay? Pinot Gris? Riesling? 2 different wines? The answer was Lincourt’s Chardonnay in both glasses. The difference was 1 was chilled, the other was not.

The next two glasses were filled with red wines, which until recently I was not a fan of. So we all swirled, sniffed and sipped trying to solve the mystery of what we were having next. This is when Captain Seahorse and I became a little more social. 2 glasses of wine down, both of us are buzzing, it was kind of a given. So the discussion starts…Cabernet? Merlot? Zinfandel? Then we received our dish, Turkey Empanadas with Cranberry Pineapple salsa. Delish! Captain Seahorse questioned the combination though, the thought of white meat and red wine just was not right until this moment of his life.
Come to find out we were drinking Pinot Noir. One was French, the other from
Oregon.

Our next pairing was sesame seared tuna with grilled portabellas. This was paired with Shiraz. By this time, Captain Seahorse and I were fully engaged in conversation with the rest of the people at the table and realized we were sitting with a few wine enthusiasts. They knew their stuff and could obviously tell we were just a couple of novices.

Next on the list was Chile Verde Sliced Sirloin Steak with Black Beans and Diced Tomatoes- a little spicy but quite tasty. I am not one for spice and when Captain Seahorse said it had a kick I considered skipping that dish, but I tried it and ate it all. This dish was paired with 2 Cabernets. One from Italy, the other from Chile. Talk about some leathery wine-OMG!

Now it was time for dessert! We had a flourless chocolate cake paired with 2 port wines. Cake was fairly good, wines not so much. Apparently port wines should not be sprung on people. They were both waaaaay too sweet for me.

At the end of the dinner, there was a quiz about the different wines. I realized early on, the lady next to me was taking notes so I made sure to do so as well. I, however, didn’t win a prize (Cazbah gift certificate), but I did know a couple of answers and had a fantastic time. We were also given the chance to purchase any of the wines served at the dinner by the case or bottle for a discounted price.

I would highly recommend going to one of these dinners held by the Cazbah. It is a great way to meet fun people while trying a few new things on the way. 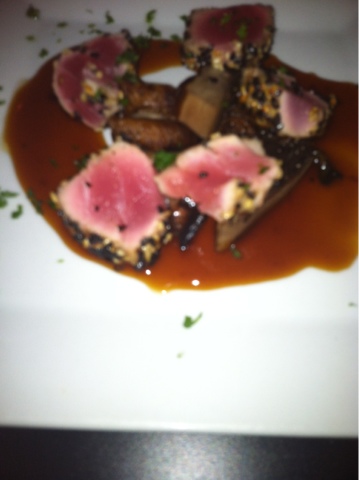 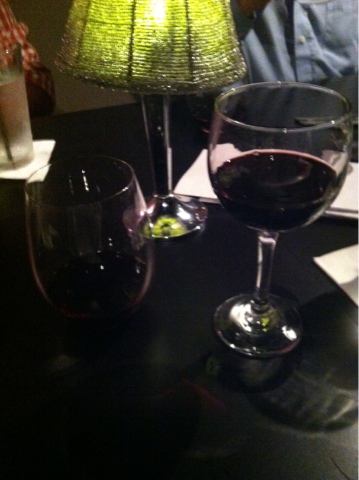 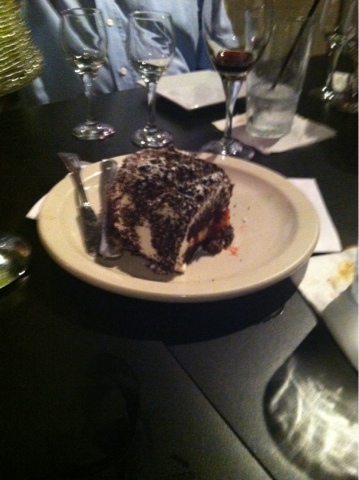